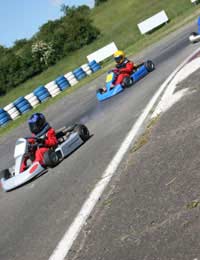 After the chassis, the engine is the second most important part of your Go-kart. Choosing the right engine for your Go-kart is vital. Most brand new Go-karts already have their own engines, so it is only really an issue if you’re planning to build your own Go-kart, or if you’re adapting a used Go-kart to suit your requirements.

Off The Shelf Engines

Off the shelf Go-kart engines are designed for short-term use. Some of them have an aluminium cylinder bore, which can rub against the steel piston rings and create lots of friction. For this reason, they don’t tend to last very long, and aren’t suitable for anyone who intends to use their Go-kart a lot.

The larger models often have a cast iron cylinder sleeve, which allows them to last longer than the aluminium variety, but they are generally more expensive.

Some off the shelf engines also have electric starts, and come with an alternator, which gives them the ability to power lights and charge batteries.

Most people choose to buy an off the shelf Go-kart engine for their Go-kart, but if you want to be more involved in the construction of your Go-kart, you might be better off building your own Go-kart.

These are very popular, as they come with the chassis already built, so you don’t need to worry about that side of things. They are relatively simple to build, although some may still require some welding or tube bending. With these kits, you just need to find an engine.

These are the most popular types of engines, as they are very versatile, and can be used in off road Go-karts, as well as those that will be racing on a track. They generally don’t need much modification to fit into a used or self-built Go-kart. The downside is that they are difficult to find.

These are quite powerful with a horsepower between three and five. Despite this, they aren’t particularly fast. They are easy to buy, but it can be difficult to adapt them to suit a Go-kart. As they are run on a vertical axle, they need a lot of work to be able to run on the horizontal axle that Go-karts require. It’s more than just a case of turning the engine on its side. There is a big risk of piston failure, as the engines are designed to stay the same way up.

You can also adapt engines from other sources for using in your Go-kart, such as moped engines, car engines, generator engines, tractor lawnmower engines, and even chainsaw engines. Some of these will be challenging to adapt, as well as being dangerous.

Ideally, you should get a trained adult to adapt and fit the engine for you, as it can be a complicated and risky procedure for anyone who isn‘t properly trained.

If you’re building your own Go-kart or modifying a used Go-kart, choosing the right type of engine can be harder than it might seem, especially as the best types are not always easy to get hold of. If you intend to be Go-kart racing on a regular basis, a brand new Go-kart is probably the best idea.