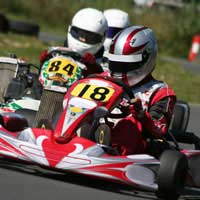 Kart racing in the UK is divided into two main categories: 2-stroke racing and 4-stroke racing. Within these two engine categories, there are further sub-divisions (which are known as karting classes). The direct drive classes can use either 2-stroke or 4-stroke engines, while the gearbox classes use engines that are mostly of the 2-stroke variety. This article focuses on 4-stroke karting, but we have a separate article on 2-stroke karting.

What are 4-stroke engines?

4-stroke engines are often industrial, air-cooled engines (unlike 2-stroke engines, which are mostly water-cooled) that have been slightly altered to fit into a kart. Honda are one of the main manufacturers of these type of engines, but these aren't specifically designed for karting purposes, so they are best suited to those who want to kart for fun or only on a semi-regular basis. Yamaha and TKM produce more powerful types of 4-stroke engines for those who are more serious about karting. These are produced specifically for karting and can run to 11,000 rpm (revs per minute). Many of these are used in the National Championship karting classes.

Karting Classes That Use 4-Stroke Engines

An Introduction to Race Strategy