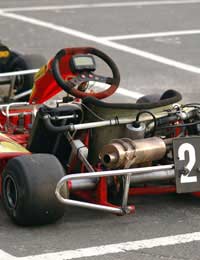 Go Karting is a popular sport across Europe, but it actually originates from America. For several decades, it was predominantly a sport for those who enjoyed Go Karting on a recreational basis, but the introduction of regulatory bodies helped it to open up to people who wanted to get a good grounding in motor sports.

Art Ingels is thought to have built the world's first Go Kart in 1956 in California. Go Karting quickly caught on with facilities in many towns and cities across the USA, although the quality of these varied a lot. The initial enthusiasm lasted until a lack of finances towards the end of the 1960s meant that Go Karting facilities began to disappear, meaning that Go Karting became a much more select sport with only those who could afford it able to take part.

Around this time, Go Kart designs were changing on a frequent basis. Many people found that they bought Go Kart parts which were quickly sidelined for newer and more modern parts. With no governing bodies overseeing the sports and its facilities, it was very much a sport for the amateur enthusiast, rather than the wannabe professional Go Karter.

In the late 1960s, European engine manufacturers became more popular than their American counterparts. This trend continued into the 1970s as McCulloch, the leading American Go Kart engine manufacturer, was bought by Black and Decker, who had no interest in producing Go Kart engines. During the 1970s, today's modern Go Kart designs came into force. The engines were at the side, rather than at the back of the Go Kart.

Because of this, air conditioning was more effective, and there was more leg room. Yamaha engines gained in popularity in the 1970s, but it was Briggs and Stratton who would become the leading producer of Go Kart engines in the US.

The creation of several regulatory bodies in the 1980s strengthened the idea of Go Karting being more than just a hobby. Initially, these were based around Mississippi. The World Karting Association (WKA) was based to the east of the river, while the International Karting Federation (IKF) was located on the other side of it. These helped different forms of Go Karting to be officially recognised for the first time, including oval racing (which is carried out on oval-shaped asphalt tracks which can be anything from one-tenth of a mile to one-third of a mile in length), sprint racing and street racing.

By the 1990s, changes in design and the introduction of the first few regulatory bodies helped Go Karting to find its place as the first step for aspiring racing drivers. Nowadays, the vast majority of racing drivers in Formula 1 and the lower formulae plied their trade on the Go Karting circuit. Kimi Raikkonen is an example of a driver who skipped much of the lower formulae in moving from Go Karting to Formula 1, but it is extremely unlikely that any driver who reaches the higher eschelons of motor racing will have bypassed Go Karting too.