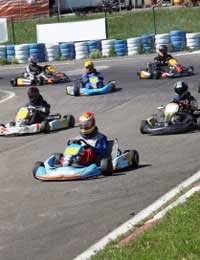 Some of the main karting categories include KF1, KF2, KF3 and KF4 all use water-cooled 125 cc two-stroke engines, which come complete with starter and clutch, but they have different technical specifications, such as carburettors and rev limits. There are also other racing categories such as KZ1, KZ2 and the Super 1 series. All of these categories are regarded as the top level of karting, and there are championships in each category.

KF1 (Formerly the Formula A category)

This is often seen as the very top level in karting. Anyone over the age of fifteen is able to take part, as long as they are of the required standard. Drivers must finish in the top 34 in KF2 before they are eligible to take part in KF1.

Because of its status as the pinnacle of karting, it is expensive, and costs can reach £50, 000 per year or more, just to take part and race. The previously used 100 cc water-cooled engines have been replaced by a 125 cc Touch-and-go (TaG) engine, which is cheaper to run.

KF2 (Formerly the Intercontinental A category)

The 100 cc direct drive engines that were previously used were replaced by 125 cc “long-life” TaG engines, which come complete with starter and clutch. These have a rev limiter, which stops drivers from going beyond 15,000 RPM.

This is one of the highest levels of karting that still has national championships in Europe, as well as in the Oceania and Asia-Pacific regions.

As with the other categories, the 100 cc water-cooled engines have been replaced by a 125 cc TaG engine to cut costs. The rev limiter only allows driver to reach 14,000 RPM.

KZ1 and KZ2 replace the 125 cc gearbox categories. Unlike the other categories, they have not been modified much.

The KF2 category is popular in the US, and uses 125 cc water-cooled two-stroke engines, along with a six-speed gearbox. The engines and the chassis have to be approved by the CIK-FIA beforehand. Drivers above the age of fifteen can enter. There are both national and continental championships.

This is one of the most popular karting categories in the UK, and is made up of three separate karting series:

An Introduction to Race Strategy